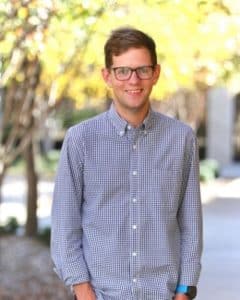 Bradley is a native of Grand Prairie, and he graduated from ACU with a bachelor’s degree in history in 2009. In addition, Bradley completed his Masters of Divinity at ACU’s Graduate School of Theology in May 2017. He loves running, reading, eating and mountains. He also enjoys the fact that he married far outside of his league. He met his wife, Rebecca, at ACU, and they married in October 2012.

Bradley feels extremely blessed to be working in ministry, and looks forward to serving UCC and its surrounding community. 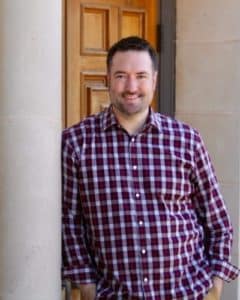 Jason serves as the Campus and Media Minister at UCC and has been with UCC since 2008 when he came on as the youth minister. Jason serves alongside his wife Karla, whom he met at UCC in 2002 and married in 2003. They have three daughters, Kaila, Alexa and Luci. The Craddock have a passion for working with young people and—after 15 years of full-time youth ministry—they recognized the need to help young people in the next phase of life as they navigate college and face decisions about who they will be and what they will do in their adult lives. The name of the Campus Ministry is “Crossroads,” because this is where all young people find themselves as they set out on their own, becoming the disciples Christ called us all to be. Jason and Karla are here to help walk alongside of each student as we all grow together.

Jason has degrees in Youth & Family Ministry, Psychology, has conducted extensive graduate studies in digital media and is currently completing a Master of Divinity degree, all from ACU.

Alejandro came to UCC in August 2022 to serve as the Bilingual Minister after preaching for 15 years at Bammel Church of Christ in Houston. He has a Bachelor’s degree in Theology, Journalism and a Master’s of Divinity from ACU. He is currently working towards his Doctorate of Ministry.

Alejandro is a recurrent speaker at conferences in the United States, Central America, and South America. He loves music and especially The Beatles. He loves to ride his Harley, read, play the guitar, and pet his cat, Calico. Alejandro and his wife Paulina raised three girls, are empty nesters and await their first grandbaby.

Jason has degrees in Youth & Family Ministry, Psychology, has conducted extensive graduate studies in digital media and is currently completing a Master of Divinity degree, all from ACU.

Michael began his youth ministry at UCC in June of 2020 after receiving his degree in Bible and Family Ministry from Harding University that May. Prior to graduation, he interned with River City Church in North Little Rock, AR while earning his degree. Michael grew up in Tampa, FL until the age of 12 then moved to Harrison, AR in 2010. Michael’s time in Harrison was rather turbulent but that is where he learned the importance of Christ’s sacrifice. He became a leader in the youth group and grew into his role. That is when he decided to become a youth minister and go to Harding University.

Michael and his wife, Whitney, met in their youth group in Arkansas, and they married in June 2019. They like to hike, although it is not possible in most of Texas. They also like to spend time with people and play board games! They are both so excited to be here in Abilene!

Karli grew up at UCC and joined the staff in March 2022 as the Administrative Assistant. Karli attended ACU and received her Bachelor’s and Master’s in Social Work and is a Licensed Master Social Worker. In 2014, Karli married her high school sweetheart, Caleb Smith. Karli and Caleb then moved to Big Spring, TX where Karli worked for Communities in Schools of the Permian Basin and then as an advisor at Howard College.

While in Big Spring, Karli had their son, Alvis. After a brief return to Abilene, the Smiths moved to Glen Rose, TX where Karli worked at a Children’s Advocacy Center. Karli and Caleb are excited to be back in Abilene with their families, and having the opportunity to raise their son at UCC. 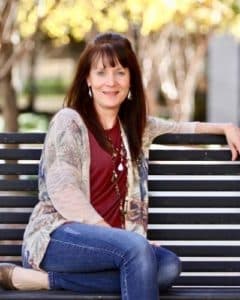 Jennifer has served as the full time children’s minister since April 2006.  She received a BBS degree from Hardin-Simmons University and Abilene Christian University and her teaching certification from McMurry University.

Jennifer moved to the Abilene area during junior high and graduated from Abilene High School. She met her husband, Roger, after graduating from college. They have two children, Josh and Sarah.

The Welch family enjoys various activities together, including playing basketball, tossing the football, fishing, working on their farm, and singing. Jennifer says, “I count my blessings daily, and working with the children at UCC is one I always include. The Lord is good, and he works in mysterious ways!” 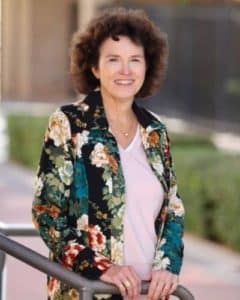 Jill grew up at UCC, and has served as UCC’s part-time accountant since January 2009. Jill was born in Rosebud, and moved to Abilene with her family when she was 4 years old. She attended Abilene Christian Schools and Abilene Christian University, receiving her BBA and MBA and is a Certified Public Accountant.

While at ACU, she married Dr. David T. Bailey, who also had grown up at UCC where his father was the long-time minister. They had three sons. David, Jr. and Lisa Bailey now live in Tyler with their two children, Todd and Jillian. Will and Ani Bailey live in Los Angeles with their three children Benjamin, Cassian and Brooklyn. Benjamin and Lyric Bailey and their four children, Jack, Piper, Stetson and Crockett, live in Abilene, where Ben owns Precision Heat and Cooling. Dr. Bailey served as an elder at UCC for many years until his death in 2000.

Barry has been the Facilities and Grounds manager for University Church since 1997. He grew up in Seymour, Texas where he developed a love for any kind of outdoor activity, including hunting, target shooting, fishing, camping, swimming  and hiking. He graduated from TSTC in 1982, moved to Abilene and married Cathy that same year. The Young’s have been members of UCC since 1982 as well. Cathy also grew up in Seymour. She is an Academic Coach and mentor  teacher for the Abilene Independent School District.

Join Us for Our Live Stream Sundays at 10 a.m.Live Stream